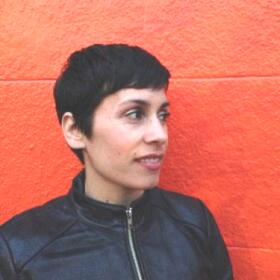 San Francisco, California
Michelle is working on a memoir about her experience healing from Lyme disease. She is a freelance journalist with an MFA who covers visual art, health and wellness.
Share this:

Michelle is working on a memoir about her experience healing from Lyme disease. She is a freelance journalist with an MFA who covers visual art, health and wellness.

When I was about 11 or 12, moles started appearing on my skin. One day a new one showed up, just down and to the left side of my lips. It was tiny and, unlike the larger moles I had, spherical. I hated it and immediately started poking and scratching it. Over the next few days, it doubled in size but was still too small to see what it actually was: a tick. I prodded it some more, until the area was constantly aching. After three days, it fell off, leaving a small, squarish, pink rash behind.

Serious Symptoms With No Simple Answers

Months later, I came down with an illness that felt like an emergency in my body. I went to bed early and slept fitfully. When I woke in the morning, I felt nearly better, but still off. My mom took me to my doctor but she said there was nothing wrong with me. In my mind, there was no reason to recall the mole that had fallen off.

Two months later, the same thing happened: I felt acutely, terribly sick, and went to bed early. The next day I woke feeling better, but not nearly as well as I had been before the flare-up, and worse still than I had felt after the first flare-up. My mom again took me to my doctor, who told us nothing was wrong. This cycle continued, until the doctor finally told my mom not to bring me back unless I was actually sick. With time, the cycle sped up and I had flare-ups every six weeks, then every month, then finally settled into a state of chronic, acute malaise.

By the time I was 24, I was struggling to hold my life together. I’d graduated from college and moved across the country to New York City but I could barely hold a job or an apartment. I’d lost my short- and long-term memory, and my hold on language was eroding. I stopped reading and withdrew from conversations, because I could no longer follow them. A weighty fatigue was my constant. My hair had thinned to a quarter of what it had been. All of my joints burned in such a way that using them in normal, daily actions felt like I was wearing them away. I worried I wouldn’t be able to walk by the time I was 30.

Instead of seeing doctors, I followed what my body was telling me. I made the tomato-based soups and sauces I craved. I roasted yams and cauliflowers daily, as these dishes took the edge off the illness. I had quit dance and sports years earlier and started Pilates. Now I was waiting tables and midway through my Pilates certification.

As I got stronger, I was able to bear the pain better but the physical requirements of my certification were draining me. Instead of running, I took long, meditative walks through the city. I decided I would move home to my parents as soon as I finished my Pilates certification. I told myself it would be for just a few months to get back on my feet.

Going to the doctor never crossed my mind; I’d seen enough and knew what they would say, that there was nothing wrong with me. It took a friend to convince me that what I was experiencing wasn’t normal. We were getting certified in Pilates together. One day in the studio, I asked if her joints hurt and could hardly believe her when she said no.

“That’s not normal,” she said. “You should see a doctor.” She suggested I talk to another woman in our group, someone who seemingly knew everyone in the city.

A week later, I was sitting in the waiting room of Dr. Darryl Isaacs, who had been in the 2004 documentary Super Size Me, about how filmmaker Morgan Spurlock ate nothing but fast food for a month to see how it affected his health. When I had seen the movie, and how caring Dr. Isaacs was in it, I had wished for a doctor like that in my own care. Fortunately, I was able to schedule an appointment with him. I was happy to learn he’s the same in real life, and he listened to me describe how I had tendonitis in every joint.

“No,” Dr. Isaacs said. “Tendonitis happens in one overused joint. Tennis elbow, pitcher shoulder. That type of thing. But every joint, that is something systemic. Fibromyalgia, lupus, MS, Lyme disease, we’ll test for those first.”

Two weeks later, his office called. I’d tested positive for Lyme disease, on both of the two most commonly used diagnostic tests. When I went back in, Dr. Isaacs put me on a medication called doxycycline.

I was still on doxy when I unpacked my bags at my parents’ house a month later. I didn’t notice a difference when I’d been on it, but after the prescription ran out, I’d climbed the stairs to my childhood bedroom, lost my balance, and slumped against my doorjamb. In that moment, I could feel that an internal fight had picked back up again.

I made an appointment with an infectious disease specialist in my hometown and expected to leave with another prescription for doxycycline. But even though I was armed with positive Lyme results on two blood tests, he denied I had Lyme disease.

He prescribed me antidepressants (that I never took) and sent me on my way.

Seeking Treatment From a Lyme Specialist

My parents set off in search of a Lyme specialist. They found Dr. Christine Green, who immediately ordered more tests and prescribed me more antibiotics. Lyme disease, she told me, becomes chronic often because of co-infections: other diseases that flourish along with Lyme.

Soon, I was on a cocktail of rotating antibiotics for Lyme and bacteria called Bartonella; antimicrobials for babesia, a malaria-like tick-born disease; antivirals for Epstein-Barr; and a collection of different supplements to support my system as it took on all these new pharmaceuticals. The months ticked by. I barely left the house except to go to work, because I was too weak. I had been so sick for so long that neither I, nor my parents, had any idea of how sick I was. With each step forward I made in my health, the more we understood how far I had to go and how sick I had been. After six months, I was no longer on the brink, but I was far from well.

I realized that relying on pharmaceuticals wouldn’t be enough to get me well and made other changes. My mom brewed up apple cider vinegar and I took other store-bought probiotics. I stopped drinking alcohol and coffee completely, and I abstained from sugar and processed foods. We kept a pot of Xochitl soup—a spicy chicken soup laced with habaneros that flushed me with fever and made me feel momentarily better--cooking all the time. I lived quietly and, thanks to my folks, ate the foods that made me feel better.

We sought out a second Lyme specialist, Dr. Steven Harris. He conferred with Dr. Green and added some more aggressive treatments. Over the course of a year, I went from oral medication to intramuscular to long-term IV antibiotics. To complement the pharmaceutical treatment, I started infrared sauna sessions, partly because I was so cold all the time, but also because the infrared wavelengths make it harder for the bacteria to survive. These sauna sessions gave me a bit more resiliency against my symptoms.

Taking Control of My Lyme Disease—And My Life

At the end of my second year of treatment, I felt trapped. I was significantly better than I had been when I moved home, but I was still terribly sick, my healing had plateaued, and my life was stagnant and joyless. I was used to living adventurously, to learning languages and living in other countries. I decided to live the life I wanted to live, even if I was still sick.

I’d always wanted to honor my Mexican-American heritage by learning Spanish, so I applied for jobs anywhere in the Spanish-speaking world. Six weeks later, I had a job lined up in Costa Rica. I talked to my doctors, and prepared to stop my IV treatment a few days before I left. When I boarded my plane, my suitcase was full of the oral medications I was supposed to take while I was away. I took them steadily for three months and then, without consulting a doctor, stopped them altogether—which is not a decision I suggest other patients do. During my remaining time in Costa Rica, my health faltered but it was nothing I wasn’t used to. What was more important for me was remembering how to live, how to explore, how to take care of myself—to let myself be inspired by the world around me.

When I returned home, I did feel sicker, but also happier than when I’d left. I refused pharmaceutical treatment for two years because I was so terrified of returning to the small, hopeless life I’d lived just after I was diagnosed. I continued to see my Lyme specialist, who provided guidance as I explored other options for treatment and started out with a complex series of herbals to treat the infections I had. I found that osteopathy helped me to heal on a deep level. A naturopath guided me through a chelation course to get rid of heavy metal toxicity and then treated the systemic yeast infection I had from so many years of antibiotics. Another naturopath helped me to stabilize my blood sugar level and I had more energy. A friend gifted me a Reiki session, which initiated me getting deep, restorative sleep. After several more sessions, I got certified in Reiki myself, even as I continued to work with my doctors. Meditation and qigong helped in how I approached my days, and I became more gentle with myself and more effective in my work.

I began to live again: I applied to grad school and completed my MFA. I opened my own wellness business. Still, even five years into treatment, I was far from well and with the stress of grad school, I reluctantly went back to pharmaceutical treatment. This time, I stripped the illnesses away with relative speed because I had treated so many underlying imbalances that were holding me back from healing. Throughout my experience, I realized I had to make my body balanced enough that the complications from Lyme couldn’t thrive. Instead, I did.

Use of this website and any information contained herein is governed by the Healthgrades User Agreement. The content on Healthgrades does not provide medical advice. Always consult a medical provider for diagnosis and treatment.